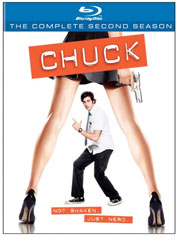 Warner Home Video has added Chuck: The Complete Second Season to their roster, continuing the TV series on DVD and Blu-Ray Disc in January.

This season, Chuck is in luck. Intersect II is ready for espionage service. And that means the old Intersect (Chuck) can go back to his old life. But if Chuck goes, he’s gone: Casey has orders to off him. In the series called “TV’s funniest comedy” by EW.com, Chuck survives to unravel mysteries of the past, become a hero in the present, and – in a stunner of a season finale – chop-and-drop himself into an even more perilous future!

Containing all 22 episodes of the season, the release will arrive either as a 6-disc DVD set or 6-disc Blu-Ray set, depending on your preference. In addition to the show, the release will contain the Featurettes ”Truth, Spies and Regular Guys: Exploring the Mythology of Chuck,” and “Dude in Distress”, exploring some of this season’s Best Action Sequences. Also included Are Chuck Versus the Webisodes, a series of Web-Originated Minifeaturettes, as well as Chuck: A Real-Life Captain Awesome’s Tips for Being Awesome and John Casey Presents: So You Want to Be a Deadly Spy?. Further you will find Declassified Scenes and a Gag Reel on the release.