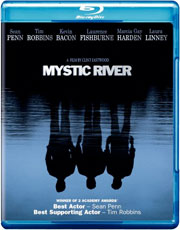 Three friends who grew up in working-class Boston drift apart after a terrible tragedy. Years later, brutal events reconnect them. Jimmy’s 19-year-old daughter is coldly murdered. Dave is a suspect. And Sean, now a cop, scrambles to solve the crime before volatile Jimmy takes the law into his own hands. Working from Brian Helgeland’s adaptation of Dennis Lehane’s novel, director Clint Eastwood shapes a masterful, brooding thriller built on family, friends and innocence lost. Sean Penn, Tim Robbins and Kevin Bacon play the pivotal threesome, joining Laurence Fishburne, Marcia Gay Harden and Laura Linney in one of the most powerful casts ever.

Featuring a 1080p high definition transfer with DTS 5.1 HD Master Audio, the release will also contain a Commentary Track featuring Tim Robbins and Kevin Bacon. Also included is the Featurette ”Mystic River: Beneath the Surface” in which Dennis Lehane tours the Boston neighborhood setting of his novel. Also included is the Bravo Channel Documentary ”Mystic River: From Page to Screen” and Interviews from the Charlie Rose Show with Clint Eastwood, Tim Robbins and Kevin Bacon. The release will be rounded out by Trailers and Teasers