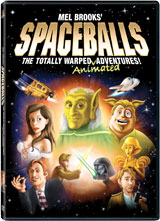 May the farce be with you! Modern filmdom and popular culture get lampooned at ludicrous speed as “Spaceballs: The Totally Warped Animated Adventures!” comes to DVD. Re-introducing the art of ridiculous satire to the small screen, the animated half-hour episodes pick up where the cult-classic feature film left off, showcasing rollicking parody of pop culture for a new generation of fans, including hilarious imitations of James Bond, Harry Potter and the video game “Grand Theft Auto.” Executive produced and Co-Created by Academy Award winner Mel Brooks* (The Producers, Young Frankenstein), “Spaceballs: The Totally Warped Animated Adventures!” reprises the roles of the original Spaceballs cast, including Joan Rivers (“The Joan Rivers Show,” Shrek 2) as the droid Dot Matrix, Daphne Zuniga (“Melrose Place,” “One Tree Hill”) as the lovely Princess Vespa and Brooks as the comic sage Yogurt. Joining the fight against the evil Dark Helmet are unforgettable characters Captain Lone Starr and his half-human-half-canine sidekick, Barf.

Fans can dig their hands into “Spaceballs: The Totally Warped Animated Adventures” when it arrives on December 29 for $19.98.