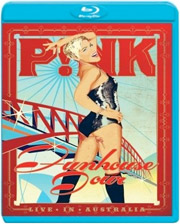 Sony Music Entertainment has added a Blu-Ray Disc version of Pink: Funhouse Tour: Live In Australia to their roster, scheduling the release for December.

This release features the Melbourne 2009 concert of pop star Pink from the Australian leg of her “Funhouse Tour.” It will feature a 1080p high definition transfer in its orgianl 1.78:! widescreen aspect ration and arrive with a DTS 5.1 HD Master Audio track.

No extras have been announced at this time, but you can get a piece of Pink on December 8 for $24.98.