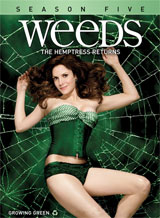 Lionsgate Home Entertainment has just added Weeds: Season Five to their release line-up, bringing the TV series back to DVD and Blu-Ray Disc in January.

The hemptress returns in the complete fifth season of the Showtime Original Series of “Weeds.” When pot-selling soccer mom, Nancy Botwin, took her homegrown business south of the border, she found the grass wasn’t greener on the other side. Now she’s pregnant with the child of a powerful politician turned dangerous drug lord – or is she? Doug and Silas are trying to branch out on their own, Andy is looking to score, and Celia attempts to turn the tables on her kidnappers. With enemies out to smoke the Queen of Green, Nancy’s sure to find a whole new crop of trouble in an all-new season of “Weeds” – starring Emmy and Golden Globe winner Mary-Louise Parker.

The 3-disc DVD set will feature all 13 episodes of the show’s fifth season, which originally aired in the summer of 2009. In addition you will find Commentaries with cast and crew member on the release, as well a Gag Reel, newly produced Featurettes and Webisodes.

The 2-disc Blu-Ray version will offer a 1080p high definition transfer of the show, complete with all the bonus materials from the DVD version.