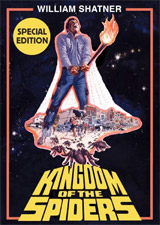 The highlight of any bad movie night collection is Kingdom of the Spiders. One of the classics of cult, the movie was the highlight of the post-Jaws monster attack rip-off genre. Now it’s getting revisted as a special edition DVD.

William Shatner stars as veterinarian “Rack” Hansen in this cult film about an Arizona town infested with a horde of arachnids that turn on the humans whose insecticides have depleted their natural food supply. After livestock belonging to Rack’s friend, rancher Walter Colby (Woody Strode), fall victim to a spider attack, entomologist Diane Ashley (Tiffany Bolling) arrives and tries to help Rack deal with the crisis — but with the big county fair fast approaching, Mayor Connors (Roy Engel) refuses to let them quarantine Colby’s ranch. Soon the remaining residents of the town must barricade themselves at lodge of Emma Washburn (Lieux Dressler) lodge in an effort to save themselves from the eight-legged invaders in the ultimate man versus spider showdown.

The only film in which a scared cow deserves an Oscar for best acting comes to DVD again on January 19th from Shout! Factory.