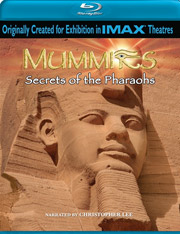 Image Entertainment will release DVD and Blu-Ray Disc versions of the IMAX movie Mummies: The Secrets Of The Pharaohs in November.

In mind-blowing IMAX detail, unravel the enshrouded human time capsules that have become the most fascinating mystery of our time – Egypt’s mummies. Probe ancient tombs to uncover these carefully hidden phenomena, and experience the dramatic adventure of their excavations. Follow top scientists as they embark on a modern-day forensic investigation of the mummies, extracting clues from our past that could have an enormous impact on medical science in our future.