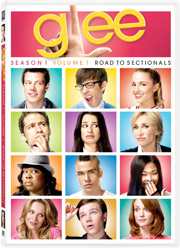 Give a cheer for TV’s hottest, funniest and most talked-about new series when the first season of “Glee” debuts on DVD. Filled with beloved characters and sensational musical numbers, “Glee” Season 1 Volume 1: Road To Sectionals is an electrifying, pitch-perfect winner. William McKinley High School once had a champion glee club, but now they are floundering. That is when an idealistic Spanish teacher (Matthew Morrison, Music & Lyrics) takes up their cause, vowing to transform the rag-tag group of singers and dancers into champions.

Arriving on 4 discs the DVD set will contain a Director’s Cut of the show’s Pilot and 12 episodes from the first season. A few bonus materials, that have not been detailed out yet, will also be part of the release.