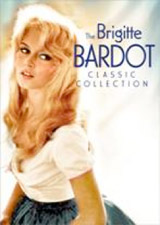 The Brigitte Bardot Classic Collection is among the titles that Image Entertainment has scheduled for DVD release in December.

The screen’s sexiest bombshell, Brigitte Bardot, sizzles in three of her most unforgettable roles! First she teams up with director Roger Vadim (Barbarella) as a virginal temptress running amok in rural Spain on The Night Heaven Fell then she’s a comic nymphet who takes Paris by storm as an amateur striptease artist in Plucking the Daisy. Finally, a grown-up Brigitte scorches up the screen as a female Don Juan, a proud destroyer of men (and women) who even drives a priest mad with her wicked misadventures! This trio of tantalizing tales of love, scandal, and betrayal will titillate seasoned Bardot fans and newcomers alike!

Arriving as a 3-disc DVD set, the release will feature anamorphic widescreen versions of the movies and complement them with Dolby Digital mono audio tracks. The collection will arrive on December 8 for $29.98.