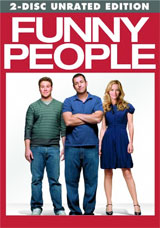 Adam Sandler plays George Simmons, a successful comedian of Adam Sandler proportions who is diagnosed with a fatal blood disease. Faced with impending death, he recognizes that he has no friends and decides to make a best friend out of an aspiring young comedian named Ira (Seth Rogen). This lopsided relationship gradually takes on aspects of true friendship as Ira forces George to try to reconnect with the people in his life, including his ex-girlfriend Laura (Leslie Mann). But forging real relationships conflicts with all the impulses that feed George’s comedy: can he truly re-create his life?

The 2-disc DVD version will offer the move’s Theatrical Cut as well as an Unrated Version for you to enjoy, both in anamorphic widescreen with Dolby Digital 5.1 audio. As extras the release also includes Deleted and Extended Scenes as well as an Extended Gag Reel with side-splitting mishaps form the set. Phone Phone Calls is actual home video footage of Adam Sandler’s prank phone calls that you will find on the release along with Line_O-Rama, a feature dishing out quotable lines you won’t forget.

The Blu-Ray Disc version will offer up the movie in 1080p high definition with a DTS 5.1 HD Master Audio track. It will include all the extras from the DVD version also, of course, but will further include a BD Live Chat option to host your own movie chat with your friends. Also included in this version is a Video Commentary featuring the cast and filmmakers for a close behind-the-scenes look.