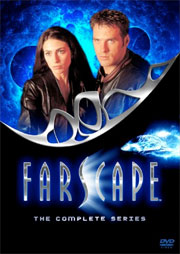 A&E Home Entertainment is releasing the entire Farscape series on DVD in November.

Strap in and hold on tight for the extraordinary adventures of John Crichton, as he finds himself surrounded by hostile aliens and soaring through the cosmos aboard Moya, a glorious living space ship.  Hunted by the relentless Peacekeepers, he allies himself with Moya’s crew — Aeryn Sun (Claudia Black), Luxan warrior Ka D’Argo (Anthony Simcoe), azure priestess Zhaan (Virginia Hey), spritely Nebari thief Chiana (Gigi Edgley), Dominar Rygel, the deposed royal ruler of the Hynerian Empire and Pilot – to search for a way out of this inconceivably alien world and return home.

Featuring all 88 episodes of the show on 25 discs, with original aspect ratios (4×3 for Seasons 1-3, anamorphic 16×9 widescreen for Season 4) and 5.1 surround sound, the DVD set will also be jammed with bonus materials, such as 29 Episode Commentaries, including “Premiere” with Rockne S. O’Bannon, Brian Henson and Ben Browder; “Jeremiah Crichton” with Claudia Black, Producer/Writer David Kemper, Browder and O’Bannon; “Bone to Be Wild” with Anthony Simcoe; “Relativity” with Lani Tupu (Crais/Voice of Pilot) and Director Peter Andrikidis; and, “Bad Timing” which features Browder, Black and Kemper discussing the series’ final episode.

There will also be Multiple Featurettes and Documentaries including “In the Beginning: A Look Back with Brian Henson”; “Making of a Space Opera” and “Inside Farscape: Save Farscape,” on which fans, cast and crew discuss the fate of their beloved series. Also look for Video Profiles featuring archival clips and cast/crew discussing their characters and roles on the show. Over 90 minutes of Deleted Scenes will be included together with Slideshows and Archival Photo Galleries, including character concepts and promo photos, as well as Production Design Galleries featuring screenshots, rough drafts and concept slide shows.