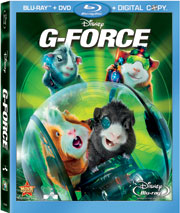 Walt Disney Home Entertainment has just unveiled details about the upcoming release of G-Force, scheduled to appear on DVD and Blu-Ray Disc December.

Buckle up for thrilling edge-of-your seat action and laugh-out-loud fun in Disney’s family comedy adventure “G-Force.” Just as the G-Force – an elite team of highly trained guinea pigs – is about to save the world, the F.B.I. shuts the secret unit down. But these next-generation action heroes – Darwin, loyal team leader; Blaster, weapons expert with attitude to spare; Juarez, drop-dead gorgeous martial arts diva; and tag-along Hurley – won’t be stopped. Armed with the latest in high-tech spy equipment, and with the F.B.I. on their tails, the fur flies as they race against the clock to save the world.

There will be two different DVD versions of the movie available. The first is a single-dic version featuring only the movie while the second will the be a 2-disc Special Edition with a number of bonus features such as a Audio Commentary by director Hoyt H. Yeatman, Jr. Also included is the Featurette ”Blasters Boot Camp”, in which Blaster (Tracy Morgan) gives viewers a high-energy, high-tech orientation into the elite world of the G-Force. ”G-Force Mastermind” is another Featurette in which Hollywood legend Jerry Bruckheimer and CG effects whiz Hoyt H. Yeatman, Jr. reveal the inspiration for this exciting adventure. Next up on the list are Bloopers and Deleted Scenes as well as the Three Music Videos “Jump” by Flo Rida featuring Nelly Furtado, “Ready To Rock” by Steve Rushton, “Go G-Force”.

The Blu-Ray Disc will arrive as a 3-disc set featuring the movie in high definition, the DVD version plus a Digital Copy of the film. The release will contian all the extras from the DVD Deluxe Edition, of course, plus the Cine-Explore Featurette with Darwin, Blaster and their Creator Hoyt H. Yeatman in which they reveal the secrets behind G-Force covert operations and the groundbreaking computer graphic work that brought this elite team of Guinea pigs to life. In Bruckheimer Animated you get a retrospective look at groundbreaking computer graphic effects in the work of Jerry Bruckheimer, plus an inside peek into the top-secret creation of G-Force’s state-of-the-art visual magic.

The Featurette ”Access Granted: Inside the Animation Lab” will allow you to take an exclusive tour with Director and computer graphic master Yeatman Jr. around the high-security facility and shows how the G-Force was animated from initial sketches to completed performances.