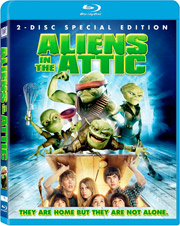 20th Century Fox Home Entertainment has added the family movie Aliens In The Attic to their release schedule, bringing the movie to DVD and Blu-Ray Disc in November.

They are home but they are not alone. Prepare for the ultimate extraterrestrial invasion full of hilarious hijinks and outrageous mind control gags. Its summer vacation, but the Pearson family kids are stuck at a boring lake house with their nerdy parents. That is until feisty, little, green aliens crash-land on the roof, with plans to conquer the house AND Earth! Using only their wits, courage and video game-playing skills, the youngsters must band together to defeat the aliens and save the world — but the toughest part might be keeping the whole thing a secret from their parents!

The Blu-Ray version will also include a Digital Copy of the movie.

“Aliens In The Attic” arrives on November 3. No price point has been announced yet.