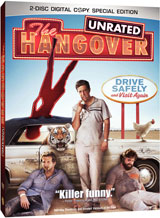 Warner Home Video has just added the comedy The Hangover to their release schedule, bringing the movie to DVD and Blu-Ray Disc in December.

They planned a Vegas bachelor party that they would never forget. Now they really need to remember what exactly went down! Whose baby is in the closet of their Caesars Palace suite? How did a tiger get in the bathroom? Why is one of them missing a tooth? And most of all, where is the groom?! What the guys did while partying can’t compare to what they must do sober in an outrageous caper that has them piecing together all their bad decisions from the night before – one hazy clue at a time. Director Todd Phillips (Old School) and an all-aces comedy cast bring it big time with unpredictable situations that somehow all fit together. Tie one on with “The Hangover”.

There will be two DVD versions for the movie. The first one os a single-disc release featuring nothing but the movie itself. A 2-disc Unrated Special Edition will also be released, featuring the movie in both, its theatrical version and the unrated Director’s Cut, as well as a number of Featurettes, such as ”“Map of Destruction,” “The Madness of Ken Jeong,” “Action Mash-Up,” “Three Best Friends Song” and “The Dan Band!”. Also included are a Gag Reel,
More Pictures from the Missing Camera and a Digital Copy of the movie.

The Blu-Ray Disc will also offer up both versions of the movie and include all of the above mentioned bonus materials.