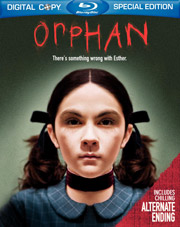 Warner Home Video included Orphan in their release line-up, scheduling the thriller for release in October on DVD and Blu-Ray Disc, just in time for Halloween.

Tragedy seems to follow nine-year-old Esther. She was orphaned in her native Russia. Her last adoptive family perished in a fire Esther barely escaped. But now the Coleman family has adopted her, and life is good. Until a classmate takes a serious fall from a slide. Until an orphanage nun is battered to death. And until Esther’s new mom wonders if that tragic fire was an accident. From Dark Castle Productions comes “Orphan,” bringing stunning new twists to the psychological thriller and locking audiences in a tightening vise of mystery, suspicion and terror. You’ll never forget Esther. So sweet. So intelligent. So creative. So disturbed.

The DVD version of the movie will feature an anamorphic widescreen presentation, complete wit ha Dolby Digital 5.1 audio track. Among the bonus materials on the release you will find Deleted Scenes as well as an Alternate Ending.

The Blu-Ray version will feature a 1080p high definition transfer, complemented by a Dolby Digital TrueHD audio track. This version will also include the Deleted Scenes and Alternate Ending, but will further contain the Featurette ”Mama’s Little Devils: Bad Seeds and Evil Children”, BD Live connectivity and a Digital Copy of the film.