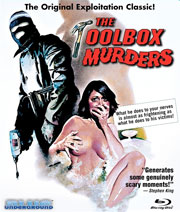 Blue Underground has just unveiled details about a Blu-Ray Disc version of The Toolbox Murders to be released in January.

In a quiet apartment complex in Los Angeles, a deranged handyman goes on a killing spree, savagely murdering “immoral” women with the tools of his trade – claw-hammers, screwdrivers, power drills and even a deadly nail gun! But these gruesome massacres are just the beginning of this landmark epic of violence and depravity that was vilified by critics, banned by censors, and treasured by splatter fans worldwide.