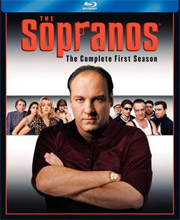 HBO Home Entertainment has just added The Sopranos: The Complete First Season to their Blu-Ray release schedule, giving Tony and the gang the chance to start all over again in November.

Meet Tony Soprano: your average, middle-aged businessman. Tony’s got a dutiful wife. A not-so-dutiful daughter. A son named Anthony, Jr. A mother he’s trying to coax into a retirement home. A hot headed uncle. A not-too-secret mistress. And a shrink to tell all his secrets, except the one she already knows: Tony’s a mob boss.

Arriving as a 5-disc set, the release will feature the show in its original widescreen aspect ratio in a 1080p high definition transfer, complemented by a number of DTS language tracks. No bonus materials have been announced at this time.

“The Sopranos: The Complete First Season” on Blu-Ray Disc will be in stores on November 3 for a friendly $69.99.