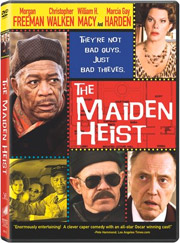 Sony Pictures Home Entertainment has added a DVD vrsion of The Maiden Heist to their line-up, bringing the comedy to your home in November.

It was a stroke of genius. But now the perfect crime is turning into a perfect disaster in this madcap comedy featuring Morgan Freeman, Christopher Walken, Marcia Gay Harden and William H. Macy.

Charles, Roger and George are the very picture of honest security guards. But when they learn their favorite artworks are being sent to another museum, they concoct a plan to switch the real masterpieces with fakes. All goes well until a mistake forces these first-time thieves into a last-minute escapade in the comedy caper that proves you’re never too old to have some new fun.

Featuring an anamorphic widescreen transfer and Dolby Digital 5.1 audio, the DVD will also contain a Commentary Track with Director Pete Hewitt, Writer Michael LeSieur and Producer Rob Paris as well as Deleted Scenes with optional commentary. The Featurette ”In the Presence of Art: Making The Maiden Heist” will also be included, as well as a series of Bloopers.