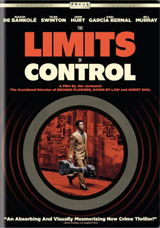 Universal Home Entertainment has announced details about Jim Jarmush’s stylish and sexy thriller The Limits Of Control on DVD this November.

“The Limits Of Control” tells the story of a mysterious loner (De Bankolé) who arrives in Spain with instructions to meet various strangers, each one a part of his dangerous mission. Featuring an all-star international cast that includes Isaach De Bankolé, Gael García Bernal, John Hurt, Tilda Swinton and Bill Murray, it’s a stunning journey in an exotic Spanish landscape that simmers with heat and suspense.

The release will feature an anamorphic widescreen transfer of the film, supplemented by a Dolby Digital 5.1 audio track. As extras the release will include the 2-part Featurette ”Behind Jim Jarmush” as well as Untitled Landscapes.

“The Limits Of Control” makes it to home video on November 17 for $29.98. No Blu-Ray version of the movie has been announced at this point.