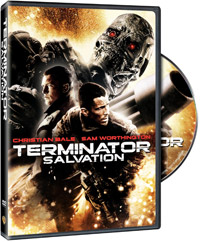 Warner Home Video has added the latest installment in the franchise to their schedule, by releasing Terminator Salvation on DVD and Blu-Ray Disc in December.

In the aftermath of Judgment Day and the machine takeover, resistance leader John Connor (Christian Bale) must counter Skynet’s plan to terminate mankind. Rallying his underground street fighters for a last, desperate battle, he realizes that to save the future he must rescue his own father Kyle Reese (Anton Yelchin). But the most shocking discovery comes with the arrival of Marcus Wright (Sam Worthington), a mysterious loner from the past who challenges Connor with an impossible choice and leads them both on a brutal journey into the heart of the enemy.

The film will appear on DVD with an anamorphic widescreen transfer and Dolby Digital 5.1 audio. The only extra on the release will be the Featurette ”The Moto-Terminator”

Now on Blu-Ray, the release really shines, as it arrives as a 3-disc version filled with bonus materials. The film itself will present itself in a glorious 1080p high definition transfer with DTS 5.1 HD Master Audio. The extras contain both the Theatrical Cut of the movie, as well as a Director’s Cut. Further you will find a WB Maximum Movie Mode on the disc, as well as the Featurettes ”Focus Points,” “Re-Forging the Future” and ”The Moto-Terminator”. Further, the release includes a Video Archive called “Resist Or Be Terminated” as well as the Terminator Salvation Official Movie Prequel Digital Comic Issue #1. Look also for BD Live features, such as an upcoming Live Community Screening and the ability to provide your own
commentary. The release will be rounded out by a Digital Copy of the theatrical version.

“Terminator Salvation” will blast into stores on December 1 with a $28.98 sticker price on the DVD and a $35.99 price tag for the Blu-Ray version. It would be superfluous to add, of course, that Warner is clearly trying to push the high definition format, making it the much more attractive version at a minimal premium, which we think is a very good move.