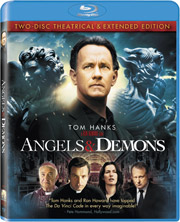 In this thrilling follow-up to “The Da Vinci Code,” expert symbologist Robert Langdon (Tom Hanks) follows ancient clues on a heart-racing hunt through Rome to find the four Cardinals kidnapped by the deadly secret society, the Illuminati. With the Cardinals’ lives on the line, and the Camerlengo (Ewan McGregor) desperate for help, Langdon embarks on a nonstop, action-packed race through sealed crypts, dangerous catacombs, and the most secretive vault on Earth!

There will be two DVD version, as usual for Sony’s theatrical releases. The first will be a single-disc DVD featuring the movie in anamorphic widescreen with Dolby Digital 5.1 audio. As extras this version will include a number of short Featurettes with titles such as “Rome Was Not Built In A Day,” “Writing Angels & Demons,” “Characters In Search Of The True Story” and “CERN: Pushing the Frontiers of Knowledge.”

A 2-disc Extended Edition DVD will also be available, featuring an extended cut of the movie with 7 minutes of additional footage. This version will also contain additional bonus materials, aside from those found on the single-disc DVD. Among thos is the Featurette “Hans Zimmer Music Studio – Powered by Sequel 2” and a look at ”Handling Props”. Further you will find the Docuemntary ”Angels & Demons: The Full Story” on the release, as well as the Featurette ”This is an Ambigram”.

Arriving on 2 discs also, the Blu-Ray version of the movie will feature a 1080p high definition transfer with a DTS 5.1 HD Master Audio track. It will contain all of the above bonus materials, as well as The Path To Illumination, following Robert Langdon through Rome as he unlocks the path of illumination. Further a Trivia Track ill be included on this version as well as Sony’s Cinechat BD-Live feature.