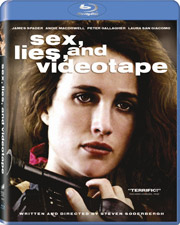 With smoldering sensuality and biting humor, the surprising relationship between the three title subjects is revealed in sex, lies, and videotape, the most-talked about erotic comedy of the decade. James Spader ran away with the Best Actor prize at the Cannes Film Festival for his brilliantly understated and seductive performance as Graham, a long-lost college friend who drifts back into town and into the lives of John, a self-involved philanderer, his angelic wife, Ann, and her saucy sister, Cynthia. One by one, each is drawn into the very personal project Graham is working on, leaving the relationships between them forever transformed.

The release offers up a 1080p high definition transfer, completely remastered and restored for this release. It will be accompanied by a Dolby Digital 5.1 TrueHD track and a series of bonus materials. Among those extras is a Commentary Track with Writer/Director Steven Soderbergh and Neil LaBute, as well as a Deleted Scene with optional commentary. Next up is the Featurette ”20 Year Reunion At The Sundance Film Festival”, as well as a series of Interview Clips featuring ”Steven Soderbergh on the Trailers,” and “Steven Soderbergh on Sex, Lies and Videotape”. The movie’s Trailers and Notes on Remastering and Restoration will also accompany the film.