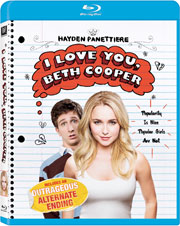 20th Century Fox Home Entertainment has added the teenage comedy I Love You, Beth Cooper to their release line-up, bringing the film to DVD and Blu-Ray Disc in November.

When Denis Cooverman (Paul Rust), the geekiest guy in high school, proclaims his love for super-popular Beth Cooper (Hayden Panettiere) during his valedictorian speech, everyone is… well… speechless! But the real shock comes that night when Beth shows up at Denis’ house with her two best friends to show him how the cool kids party. You’ll LOL as Denis tries to keep up with Beth — and stay away from her maniacal ex-boyfriend Kevin and his ticked-off pals.

The DVD version will feature an anamorphic widescreen transfer with Dolby Digital 5.1 audio and will also come with an Alternate Ending and 4 Deleted Scenes. Also included are the Featurettes “I Love You, Larry Doyle” and “We Are All Different But That’s A Good Thing”. In addition, the disc will contain an Improvised song by Paul Rust, called “Peanut Butter Toast” as well as the FOX Movie Channel Presents Featurettes ”In Character with Hayden Panettiere” and ”In Character with Paul Rust”.

The Blu-Ray Disc version will arrive with a 1080p high definition transfer and DTS 5.1 HD Master Audio. You will find the same bonus materials on the release as on the DVD.