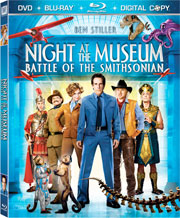 20th Century Fox Home Entertainment has revealed details about the upcoming DVD and Blu-Ray Disc version of Night at the Museum 2: Battle of the Smithsonian, scheduled for release in December.

History is larger than life — and twice as funny — in this monumental comedy sequel. Ben Stiller stars as Larry Daley, a former night watchman at the Museum of Natural History, where the exhibits come alive after dark. But now Larry’s nocturnal friends are being retired to the archives of the Smithsonian Institution, luring him back for a hilarious, all-out battle against a cranky Egyptian Pharaoh who plans to take over the museum… and the world!

Fox will release a single-disc DVD and a 2-disc Special Edition DVD version of the film, featuring anamorphic widescreen transfers of the movie with Dolby Digital 5.1 audio. Both versions will include a Commentary Track featuring cast and crew members, Gag Reel and Deleted Scenes, as well as a number of Featurettes, such as “Curators of Comedy: Behind the Scenes with Ben Stiller,” “Cherub Bootcamp,” and “Phinding Pharaoh With Hank Azaria.”

In addition, the Monkey Mischief Special Edition will contain the Multi-Part Featurette “Show Me The Monkey,” consisting of “Monkey Business,” “Primate Prima Donnas,” and “The Secret Life of a Monkey Movie Star: Life Off Camera.” Further the release will contain the Games “Monkey Slap” and “Abel and Dexter’s Flights Of Fancy.”

The Blu-Ray Disc version will be presented in 1080p high definition with high definition audio also. In addition to all the bonus materials found on the DVD versions, this release will contain Additional Featurettes and a third disc containing a Digital Copy of the film.