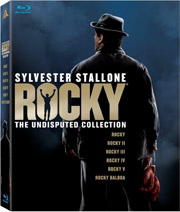 In Rocky, Sylvester Stallone is a Philadelphia club fighter who seems to be going nowhere. But when a stroke of fate puts him in a ring with the world heavyweight champion, Rocky knows that it’s his one shot at the big time — a once in a lifetime opportunity to “go the distance” and come out a winner!

In Rocky II, After club fighter Rocky Balboa (Stallone) goes the distance with the world heavyweight champion, boxing fans clamor for a rematch. But Rocky, having sustained massive injuries in the bout, announces his retirement. Though he tries to make a new life for himself, Rocky realizes that he can’t escape his true calling. The ring beckons once more, and the “Italian Stallion” must prepare for the fight of his life.

As Rocky Balboa (Stallone) fights his way into the hearts of millions in Rocky III, life couldn’t be better. He scores ten consecutive wins, lands lucrative endorsement contracts and becomes famous throughout the world. But when Clubber Lang (Mr. T) K.O.s Rocky in a humiliating defeat, it becomes apparent that the “Italian Stallion” has lost his edge. Considering hanging up his gloves, Rocky receives encouragement from an unlikely ally: his old nemesis, Apollo Creed (Carl Weathers). With Creed’s help, Rocky strives to regain the “eye of the tiger” before confronting Lang in a grueling rematch for the world heavyweight championship.

In Rocky IV, Rocky (Stallone) proudly holds the world heavyweight boxing championship, but a new challenger has stepped forward: Drago (Dolph Lundgren), a six-foot, six-inch, 240-pound fighter who has the backing of the Soviet Union. This time, Rocky’s training regimen takes him to icy Siberia, where he prepares for a globally-televised match in the heart of Moscow. But nothing can truly prepare him for what he’s about to face — a powerfully charged fight to the finish in which he must defend not only himself, but also the honor of his country!

Upon returning home from his latest triumph in Rocky V, Rocky (Stallone) learns that all of his money has been lost by an unscrupulous financial advisor. To make matters worse, his fight-related injuries force his retirement from the ring. So Rocky, his wife Adrian (Shire) and his son Rocky Jr. (Sage Stallone) move to their old low-rent neighborhood in South Philadelphia. There, the fighter must resolve the deep-rooted resentment held by his son, a bitterness that grows when Rocky trains Tommy Gunn (Tommy Morrison), a young boxer who soon rises to national prominence. When Tommy turns against his mentor and publicly taunts him, Rocky knows he must fight once more.

In the latest entry of the franchise Rocky Balboa, 30 years after the clang of the first bell, Rocky dons his gloves for the last time! Armed with a highly credible, heart-wrenching story, Rocky Balboa reminisces about his glory days for the locals at his Philly diner, Adrian’s. But his quiet world is suddenly rocked when the current reigning champ (Antonio Tarver) – after losing to a virtual, in-his-prime Rocky in a computer-simulated match — challenges the “out-to-pasture” stallion to the real thing! Not one to back down, Rocky commits to the unthinkable: He agrees to the fight of his life…and pushes himself to the breaking point to go the distance one last time.

MGM is dedicating a separate disc for the bonus materials of the release and includes things such as the Feeling Strong Now Trivia Game , as well as a 3-part Documentary, called ”In The Ring”. Also included is the Featurette ”Three Rounds With Legendary Trainer Lou Duva”, and the Steadicam: Then And Now. A look at The Opponents is also included, in addition to an Interview With A Legend – Bret Sugar.

Featuring brand new 1080p high definition transfers for the movies, along with DTS 5.1 HD Master Audio language tracks, “Rocky: The Undisputed Collection” will arrive in stores on November 3 for $99.99.