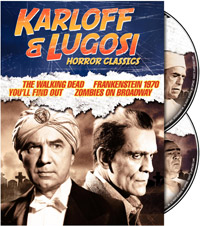 Just in time for a nice Halloween night with good old horror movies, Warner Home Video has added a classic horror quadruple feature to their release list, bringing the Karloff & Lugosi Horror Classics to DVD in October. The 2-disc release features the movies The Walking Dead, Frankenstein 1970, You’ll Find Out and Zombies On Broadway.

In The Walking Dead Boris Karloff is resurrected anew in the eerie tale of a man framed for murder. Sent to the chair… and seeking revenge after being brought back to life by science. The film will also contain a commentary track by historian Greg Mank.

In Frankenstein 1970 Karloff operates the lab switches and gizmos as Dr. Victor Frankenstein. Granting a film crew access to shoot a horror flick at his family castle… and now having what he needs for his monstrous experiments: fresh young body parts ready for harvesting. A commentary track by historians Charlotte Austin, Bob Burns and Tom Weaver is included for this film, as well as the theatrical trailer.

In You’ll Find Out, Boris Karloff, Bela Lugosi and Peter Lorre scare everyone silly planning murder to nab a young heiress’ inheritance in a spoofy, spooky haunted house tale featuring the music and merriment of popular Kat Kyser and his band. The film will also include the theatrical trailer.

For $26.98 you can add the “Karloff & Lugosi Horror Classics” to your movie collection when the DVD arrives on October 6