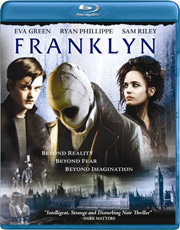 Image Entertainment has added the fantasy thriller Franklyn to their DVD and Blu-Ray Disc line-up, releasing the film in November.

Four souls bound by fate, romance and tragedy collide in the parallel worlds of London and the futuristic Meanwhile City, where a single bullet will alter the course of their lives forever. A masked detective, a self-destructive art student, a desperate father, and a lovelorn romantic are just a few of the unforgettable characters in this visually stunning fantasy thriller.

Arriving in widescreen and with Dolby Digital 5.1 audio on DVD, the release has no bonus materials. The Blu-Ray version will feature a DTS 5.1 HD Master audio track to supplement the 1080p high definition transfer.