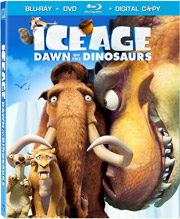 20th Century Fox Home Entertainment has scheduled the release of Ice Age 3: Dawn Of The Dinosaurs for October, bringing the film to DVD and Blu-Ray Disc.

In the coolest Ice Age adventure yet, Manny and the herd discover a lost world of ferociously funny dinosaurs, including a cranky T. rex who’s got a score to settle with Sid! Meanwhile, Scrat goes nuts over the beautiful Scratte, but is she trying to win his heart – or steal his acorn?

A Single-disc DVD will be available, featuring the movie in its 1.85:1 widescreen aspect ratio with a Dolby Digital 5.1 audio track and only a Filmmaker Commentary.

Also available is a 2-disc DVD featuring the movie and commentary track, plus the Two Scrat Shorts ”Gone Nutty – Scrat’s Missing Adventure” and ”No Time For Nuts”. Also included is The Sabre-Toothed Squirrel: Natures Nutty Buddy and the Drawing Tutorial “Scrat: From Head To Toe”. Further included are Scrat: “Breaking Story,” Scrat: “News Report” and Fox Movie Channel Presents: Making A Scene. The Featurettes continue with ”Buck…Easel to Weasel,” “Falling for Scratte,” and “Unearthing the Lost World”. You will also find the Walk The Dinosaur Music Video on the disc, as well as a few Interactive Games.