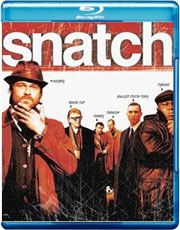 “Snatch” is an edgy and hilarious film about a diamond heist gone wrong, a colorful Irish gypsy-turned-prize fighter…and a very temperamental dog.

In the heart of gangland, two novice unlicensed boxing promoters, Turkish (Jason Statham) and Tommy (Stephen Graham), get roped into organizing a rigged bare-knuckle fight with local kingpin/villain and fellow boxing promoter Brick Top (Alan Ford). But all goes wrong when wildcard Irish gypsy boxer One Punch Mickey O’Neil (Brad Pitt) starts playing by his own rules, and the duo find themselves heading for a whole lot of trouble.

The release will include a Commentary Track with Writer/Director Guy Ritchie and Producer Matthew Vaughn and Deleted Scenes with optional commentary. Also included are the Featurettes ”The Snatch Cutting Room,” and “Making Snatch”, as well as a Video Photo Gallery and Pikey Subtitles.

The release will be rounded out by TV Spots & Trailers and Sony’s movieIQ Trivia Track.