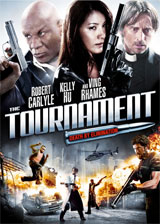 Genius Products has slated the actioner The Tournament for release in October, giving us the chance to witness Ving Rhames, Kellu Hu and Robert Carlyle in an explosive, action-loaded thriller where the winner takes all.

Every seven years, thirty of the world’s most deadly assassins face off against one another for an outrageous cash prize. There’s only one rule: kill or die. As dozens of wealthy gamblers watch via closed-circuit TV, a city is overrun by brutal assassins – all aiming to be the last one standing.

The release will arrive sporting an anamorphic widescreen transfer and Dolby Digital 5.1 audio, but no bonus materials have been announced.