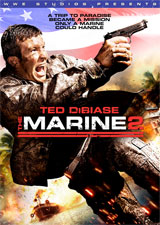 Inspired by a true story, “The Marine 2” was shot entirely on location in Phuket, Thailand and stars WWE Superstar Ted DiBiase as Marine recon sniper Joe Linwood. Reminiscent of the 2001 Dos Palmas incident, Linwood’s trip to paradise with his wife is suddenly shattered when guerillas take control of a secluded five-star resort asking for a substantial ransom. The guerilla leaders begin murdering hostages as the clock ticks away, forcing Joe to use his expert skills to save the hostages from certain death.

The release will include Behind-the-scenes Footage of some of the movie’s fight scenes as well as the Featurette ”Making Of The Terrorist Siege”. Also look for a Profile on Ted DiBiase, including interviews with his brother Brett and his legendary father Ted DeBiase Sr.

An Inside Look at the Thailand shoot is included also, as well as a selection of