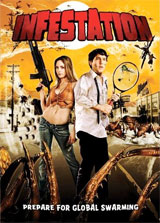 Fear takes over a mundane workday when slacker office drone Cooper (Chris Marquette) wakes up in a massive cocoon spun by mutant, flesh-eating insects. One by one, Cooper unwraps those around him, forming a team of strangers to fight off the infestation. The team and other survivors must battle to stay alive and take back the Earth by fighting off gigantic flying bugs and human hybrid mutants.

The DVD version will feature an anamorphic widescreen presentation of the movie with a Dolby Digital 5.1 audio track. As extras you will find a Commentary Track by the director on the disc, as well as a number of Previews other upcoming titles.