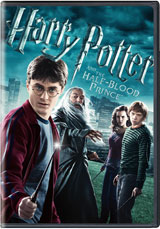 Warner Home Video has just announced the release of Harry Potter And The Half Blood Prince, bringing the movie to DVD and Blu-Ray Disc this December.

Voldemort is tightening his grip on both the Muggle and wizarding worlds and Hogwarts is no longer the safe haven it once was. Harry suspects that dangers may even lie within the castle, but Dumbledore is more intent upon preparing him for the final battle that he knows is fast approaching. Together they work to find the key to unlock Voldemorts defenses and, to this end, Dumbledore recruits his old friend and colleague, Professor Horace Slughorn, whom he believes holds crucial information. Meanwhile, Harry discovers an old book marked mysteriously “This book is the property of the Half-Blood Prince” and begins to learn more about Lord Voldemort’s dark past.

“Harry Potter And The Half Blood Prince” will conjure itself onto store shelves on December 1 as a single-disc DVD, a 2-disc Special Edition DVD and a 3-disc Blu-Ray version featuring the movie, along with a Digital Copy and DVD version of the film. No extras or price points have been announced yet.