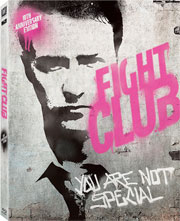 A lonely, isolated thirty-something young professional in an unidentified, semi-stylized city, seeks an escape from his ordinary life with the help of a devious soap salesman. They find their release from the prison of reality through underground fight clubs, where men can be what the world denies them.

The release features a 1080p high definition transfer of the movie, supplemented by a DTS 5.1 HD Master Audio track. The release will include a series of bonus materials, such as a series of Commentary Tracks – the first one with David Fincher, the second one featuring David Fincher, Brad Pitt, Edward Norton and Helena Bonham Carter, a third one with Chuck Palahniuk and Jim Uhls, and a fourth one boasting Alex McDowell, Jeff Cronenweth, Michael Kaplan and Kevin Haug.

Also included are a series of Deleted and Alternate Scenes, an Interview with Ed Norton, as well as Behind-the-scenes Vignettes. The fun doesn’t end there, however, as this Blu-Ray version will also contain a number of new materials, such as the Featurettes ” A Hit In The Ear: Ren Klyce and the Sound Design of Fight Club,” “Flogging Fight Club” and ”Insomniac Mode: I Am Jack’s Search Index, Commentary Log, Topic Search”

The release will be rounded out by Trailers and TV Spots, as well as Public Service Announcements and Internet Spots. A Music Video and Photo Gallery will round out the release.

“Fight Club” arrives for the first time in high definition on November 17 for $39.98.