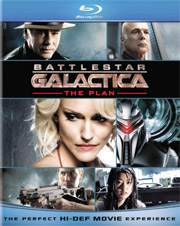 Universal Home Entertainment has added Battlestar Galactica: The Plan for release on DVD and Blu-Ray Disc in October.

The Cylons began as humanity’s robot servants. They rebelled and evolved and now they look like us. Their plan is simple: destroy the race that enslaved them. But when their devastating attack leaves human survivors, the Cylons have to improvise. Battlestar Galactica: The Plan tells the story of two powerful Cylon leaders, working separately, and their determination to finish the task.

The DVD version will feature an anamorphic widescreen transfer of the TV movie with a Dolby Digital 5.1 audio track. As extras the release will contain a Commentary Track with Director/Star Edward James Olmos and Executive Producer/Writer Jane Espenson as well as a series of Featurettes, such as ”From Admiral to Director: Edward James Olmos & The Plan,” “The Cylons of The Plan,” “The Cylon Attack” and ”Visual Effects: The Magic Behind “The Plan””.

The Blu-Ray version, featuring a 1080p high definition transfer and DTS 5.1 HD Master Audio track, will contain the same bonus materials as the DVD version but in addition come with a BD Live Trivia.