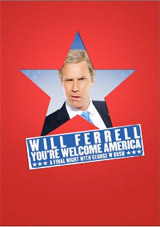 HBO Home Entertainment will release Will Ferrell: You’re Welcome America. A Final Night With George W. Bush on DVD this November, giving fans a chance to once again experience Ferrell in one of his most hilarious character spoofs.

Taking on Bush’s Texas-Connecticut childhood, his academic and social career at Yale, his stint as a Major League Baseball co-owner, his emergence as a political figure and governor, and his cherished, if checkered, tenure in and out of the White House – Ferrell’s high-spirited caricature shows that “the ex-president turns out to be a hell of a lot of fun to hang out with” (New York Post).

The 90-minute feature presentation will be accompanied by a number of bonus materials, such as The Bush on Bush Interview, in which Will Ferrell appears in a dual role as President Bush interviewing himself as Rancher Bush, both reminiscing on the best moments in the White House. Also included is Road to Broadway, a behind-the-scenes featurette including interviews with cast and crew. For trivia fans, there is the Interactive True/False Game, in which viewers get to test their knowledge of the 43rd President. The release will be rounded out by a Digital Copy of the live special for Windows and Fairplay/iTunes.

“Will Ferrell: You’re Welcome America. A Final Night With George W. Bush” will be in stores on November 3 for 19.98.