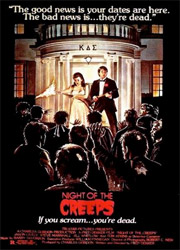 Sony Pictures Home Entertainment has just added the shlocky 1986 horror flick Night Of The Creeps to their release line-up, bringing the film to DVD and Blu-Ray Disc just in time for Halloween.

In this campy chiller, a college couple, in 1959, see an object plummet to Earth like a meteor. The boy accidentally swallows a space-slug that shoots out. In 1986, two freshmen roam the campus and stumble across the corpse of the boy who swallowed the space-slug. Once thawed out, the corpse comes to life.

The DVD version will come around for $19.94 while the Blu-Ray version will carry a $24.95 sticker price when this cult film arrives in stores on October 27