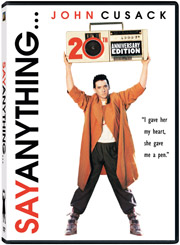 In this charming critically acclaimed tale of first love, Lloyd (John Cusack), an eternal optimist, seeks to capture the heart of Diane, an unattainable high school beauty and straight-A student. He surprises just about everyone – including himself – when she returns the sentiment.

The DVD version will feature an anamorphic widescreen transfer of the movie with Dolby Digital 5.1 audio. The release will contain an Introduction and Commentary by Cameron Crowe, John Cusack and Ione Skye. Also included are Deleted Scenes, Extended Scenes and Alternate Scenes with optional commentayr by Cameron Crowe.

The movie’s Vintage Promo Featurette will also be included, as well as an all new Conversation with Cameron Crowe. Also brand new is the Featurette ”I Love Say anything”. Trailers, TV Spots and a Photo Gallery round out the release.
The Blu-Ray version offers up a 1080p high definition transfer with a DTS 5.1 HD Master audio track and will include all of the bonus materials from the DVD version. In addition, however, you will also find an extensive Trivia Track on the disc, as well as a Retrospective Featurette called ”An Iconic Film Revisited: Say Anything…20 Years Later”.