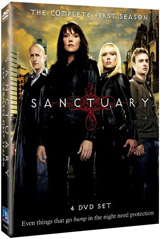 E1 Entertianment has just announced Sanctuary: The Complete First Season on DVD, scheduling the release as a 4-disc DVD set for September.

“Sanctuary” follows the adventures of the beautiful, enigmatic and always surprising Dr. Helen Magnus, her new recruit, forensic psychiatrist Dr. Will Zimmerman and her fearless daughter Ashley.  Together they track down, study and protect the strange and often terrifying creatures that secretly populate our world. Although dismissed as monstrous figments of our imaginations and the stuff of our nightmares, Magnus recognizes that the world is full of nature’s mistakes and triumphs.  And she has the spectacular proof that they are indeed real.  For some ‘abnormals’, Magnus is their protector.  For a dangerous few, she is their captor.

The release will feature all 13 episodes form the show’s first season on 4 discs, presenting them in anamorphic widescreen with Dolby Digital 5.1 audio. As extras the release will contain Commentary Tracks on all 13 episodes, as well as three Featurettes. Further Webisodes, Bloopers, a Photo Gallery and a Season 2 Preview will also be included.