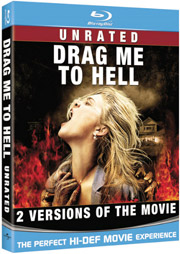 Universal Home Entertainment has added Sam Raimi’s return to the horror genre just in time for Halloween, slating Drag Me To Hell for release on DVD and Blu-Ray Disc in October.

Christine Brown (Alison Lohman) is on her way to having it all: a devoted boyfriend
(Justin Long), a hard-earned job position, and a bright future. But when she’s forced to make a tough decision that evicts an elderly woman from her house, Christine becomes the victim of an evil curse. Now she has only three days to dissuade a dark spirit from stealing her soul before she is dragged to hell for an eternity of unthinkable torment.

The DVD version will feature an anamorphic widescreen transfer of the film with Dolby Digital 5.1 audio. As the only extra the release will include Production Diaries, a 30-minute behind-the-scenes featurette filled with scares, secrets and surprises.

The Blu-Ray version will feature a 1080p high definition transfer of the movie, complemented by a DTS 5.1 HD Master Audio track. In terms of extras, it will include the same Production Diaries found on the DVD, but will also come with a BD Live feature to access additional online features and a Universal Ticker giving you updates on the latest Universal releases. A Digital Copy will also be included on this version.