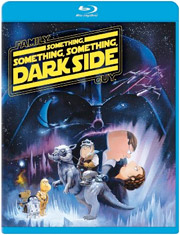 Following “Blu-Harvest,” the second story will arrive in 1.33:1 1080p on Blu-Ray with a 5.1 DTS-HD Master Audio track. Extras on both DVD and Blu-Ray include a Pop-up Video Track, Poster Art, an Animatic of the episode and Deleted Scenes. The Blu-ray will also come with a Digital Copy.