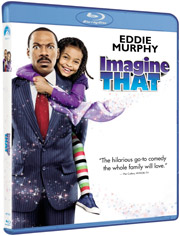 Paramount Home Entertainment has just added the latest Eddie Murphy movies, Imagine That to their release line-up, bringing the family comedy to DVD and Blu-Ray Disc in October.

What if your daughter’s imagination was the secret to your success? When a highly competitive money mogul (Eddie Murphy) finds his financial kingdom slipping, he turns to his 7-year-old daughter (Yara Shahidi) and her fantasy world of imaginary princesses for help. Embarking on a whirlwind journey of comic proportions, father and daughter are about to discover that sometimes all you need is a little imagination – and a lot of love.

Presenting the movie in 1080p high definition with Dolby Digital 5.1 TrueHD audio, the Blu-Ray version will also contain a large number of bonus materials, such as a Commentary Track with Karey Kirkpatrick and Yara Shahidi. A series of Featurettes, all presented in high definition, will also be included, featuring things such as ”Yara Shahidi Set Tour,” “A Playgound of the Mind,” “Getting the Part,” “Star Blanket: Native American Influence,” “The King and His Jesters,” “What Were They Really Saying?” and various Outtakes.

The DVD version will arrive with the same bonus materials, though all presented in standard definition, of course.