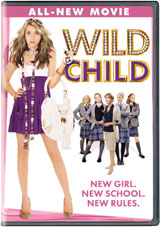 Universal Home Entertainment has added the teenage comedy Wild Child to their release line-up, scheduling the film for release on DVD in late September.

Sixteen-year-old Poppy (Emma Roberts) is an LA teen diva who does what she wants, whenever she wants. But after an over-the-top prank pushes her father one step too far, she finds herself shipped off to the one place where everything will change: a British boarding school. No cell phones, no designer clothes…no way. Desperate to break free, she sets in motion the ultimate escape plan involving the head mistress’ son – only to discover that this could be the reason she wants to stay.

Offering an anamorphic widescreen presentation of the movie with Dolby Digital 5.1 audio, the release will also include Deleted Scenes and a Commentary Track by Director Nick Moore and Writer Lucy Dahl, as well as the multi-part Making-of Featurette ”The Making of Wild Child”.