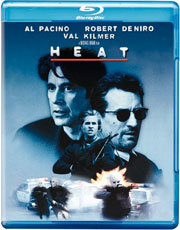 Warner Home Video has just added a Blu-Ray version of Michael Mann’s thriller Heat to their release schedule, planning to release the film in November.

The Blu-Ray version will offer up a 1080p high definition transfer of the movie and complement it with a Dolby Digital 5.1 MLP lossless audio track. The release will also be stuffed with extras, spearheaded by a Commentary Track by Writer/Producer/Director Michael Mann. Also included are 11 Additional Scenes and 5 Featurettes, such as ”True Crime”, recalling the Real-Life Chicago Cop and Criminal Whose Exploits Inspired the Movie, ”Crime Stories” showing the Screenplay’s 20-Year History and How the Movie Finally Got Greenlit, ”Into the Fire”, a look at filming in L.A., Cast Training, Shooting the Climactic Downtown Heist and Post-Production, ”Pacino and De Niro: The Conversation”, revealing the Anatomy of This Historic On-Screen Showdown, and ”Return to the Scene of the Crime”, revisiting the Film’s Real-Life L.A. Locations Years Later. The disc will be rounded out by the movie’s Theatrical Trailers.