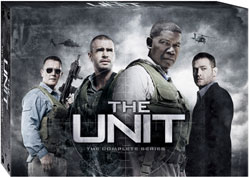 20th Century Fox Home Entertainment has just added The Unit: The Complete Giftset to their release line-up, making all of the show’s Four Seasons available on 19 DVD Discs in a single packaging.

Known only as “The Unit,” this ultra-secret contingent of Special Forces soldiers operate outside the usual military chain of command.   Their very existence is a closely held secret protected by the soldiers themselves.   Their wives, who are also in on the secret, strictly adhere to a fictitious cover story that is provided for them.  “The Unit” chronicles a team of unknown heroes who, without ever receiving credit, risk their lives while protecting others.

The release will contain a large number of all-new bonus materials, including countless Deleted Scenes and Behind-the-Scenes Featurettes as well as Commentary Tracks on selected episodes.