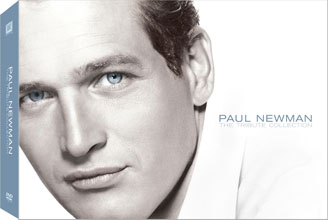 His looks were devastating. His charm was legendary. His legacy is astonishing. Paul Newman – film’s most enduring superstar – is a giant of the silver screen who not only quickly attained icon status, but continued to deliver a string of powerhouse performances throughout his remarkable career.

Gathered here for the first time are 13 of his best films, accompanied by a captivating coffee table book that traces the story of Newman’s ascent in Hollywood. Including a stunning array of photos, some of which have never been seen before, this definitive collection is a timeless addition to any library.

The coffee table book will be a 136-page soft-bound book with never-before-seen images of Paul Newman along with cast, crew and the film’s set, as well as Excerpts from each film and Personal quotes from Paul Newman.

“The Paul Newman Tribute Collection” will be in stores on September 22 for $89.98.