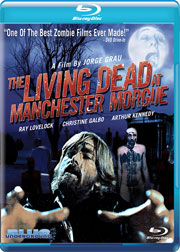 Blue Underground has added a Blu-Ray Disc version of Jorge Grau’s cult horror classic The Living Dead At Manchester Morgue to their fall line-up in high definition. Also known as “Let Sleeping Corpses Lie, ” the film will be in stores in October.

Two traveling companions, George (Ray Lovelock) and Edna (Christine Galbo), come across a small town infested with the “living dead” that are satisfying their cannibalistic hunger on anyone they come across. Discovering that an agricultural machine using radiation waves is at the root of all the havoc, George and Edna fight for survival and their innocence as they are pursued by a relentless detective (Arthur Kennedy) who is convinced they are responsible for the ghoulish acts of violence plaguing the countryside.

Featuring a 1080p high definition transfer with DTS 5.1 HD Master Audio, the release will also include Interviews and the on-location Featurette ”Back to the Morgue” with Director Jorge Grau. Also included are Theatrical Trailers and TV and Radio Spots as well as a Poster & Still Gallery.

“The Living Dead At Manchester Morgue” will rise from the dead on October 27 for $29.95.