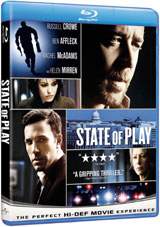 Universal Home Entertainment is throwing State Of Play into the ring by bringing the film to DVD and Blu-Ray Disc in September.

Academy Award®-winner Russell Crowe leads an all-star cast, including Ben Affleck, Rachel McAdams & Helen Mirren in the gripping thriller about deception, manipulation & corruption. When D.C. Reporter Cal McCaffrey (Russell Crowe) is assigned to investigate the murder of an assistant to an up-and-coming politician (Ben Affleck), he uncovers a conspiracy that threatens to bring down the nation’s power structures. In a town of spin-doctors and wealthy power brokers, he will discover one truth: when fortunes are at stake, no one’s integrity, love or life is safe. From director Kevin Macdonald of The Last King of Scotland, State of Play brings together strong performances, riveting suspense and is “sophisticated, intelligent and powerful” (Shawn Edwards, Fox-TV).

The DVD version offers up a widescreen version of the film with Dolby Digital 5.1 audio. As extras, the release contains Deleted Scenes and the Featurette ”The Making of State of Play”.

The Blu-Ray version will feature a 1080p high definition transfer of the movie, supplemented with a DTS 5.1 HD Master Audio track. The disc will also contains the Deleted Scenes and the Featurette ”The Making of State of Play” found on the DVD version, but in addition it will also come with BD Live features as well as a U-Control Picture-in-picture Video Commentary as well as a U Control Washington, D.C. Locations feature.