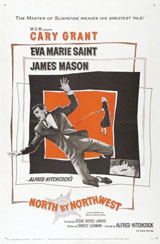 Warner Home Video has just announced a 50th Anniversary Edition of the Alfred Hitchcock classic North By Northwest for release on DVD and Blu-Ray disc.

Cary Grant (as the ultimate man-on-the-run in his fourth Hitchcock teaming) gives a superlative performance while Eva Marie Saint (perfect Hitchcock heroine Eve Kendall) is at her sultry and sexy best in this heart-pounding thriller.  Grant plays Manhattan adman Roger Thornhill, who is at once plunged into the world of spies and counterspies, abducted, framed for murder, chased, and (in the signature set-piece) crop-dusted. At the films’ end, he hangs on for dear life from the facial features of Mount Rushmore’s Presidents where he ultimately rescues Miss Saint.

The DVD version will feature a brand new remastered transfer from original VistaVision film elements in anamorphic widescreen with Dolby Digital audio. As extras you will find bonus materials from the film’s previous release on the disc, such as the Screenwriter Commentary and the Isolated Score, as well as the 2003 TCM Documentary ” Cary Grant: A Class Apart” and the Making Of Featurette ”Destination Hitchcock” hosted by Eva Marie Saint. Apart from these extras however, you will also find Two New Documentaries on the release, entitled ”The Master’s Touch: Hitchcock’s Signature Style”, which
consists of interviews, clips, and behind-the-scenes footage to reveal what defines the unmistakable Hitchcock style, and ”North by Northwest: One for the Ages” in which today’s top directors Guillermo del Toro, William Friedkin, Curtis Hanson, and Francis Lawrence share their interpretations on the film’s importance and its influence on their own work. The release will be rounded out by a Photo Gallery and the movie’s Trailer Gallery.

The Blu-Ray version will include all the extras found on the DVD version and will offer a 1080p high definition transfer of the film, also coming from an 8K transfer of the original VistaVision film elements. In addition, this version also includes a 44-page Booklet full of photos, facts and insider information.