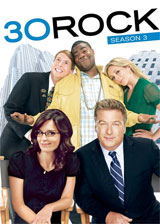 As we announced previously, 30 Rock: Season 3 is scheduled for release by Universal Home Entertainment on DVD and finally the full details have been emerging.

The 3-disc DVD set will include Commentary Tracks on several episodes, Deleted Scenes, and the Featurette “Behind-the-scenes with the Muppets”. Also included is 1-900-OKFace, a Table Read for the episode “Kidney Now!” and a Photo Gallery. Alec Bladwin’s SNL Monologue will also be included as well as Tracey Jordan’s Rant and Award Acceptance Speeches.

The set is still scheduled for September 22, but still no Blu-ray version has been announced.